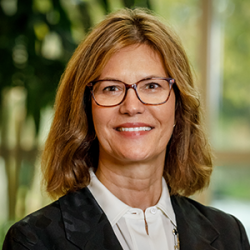 Debbie Gerlicher has always been an advocate at heart. After obtaining a degree in Political Science from Oregon’s Willamette University, she worked at the state senate. But the legislative wheels moved too slowly for Debbie’s passion to affect real change in people’s lives. She moved on, but never lost her calling to help others achieve their best life possible.

She found the perfect vehicle into which to channel her desire to help others – financial services and specifically, First Financial Security, Inc., the company owned by Debbie and her husband, Phil. From the company’s earliest days, Debbie gravitated toward the business model’s core principle – if you provide people with the knowledge, tools and opportunity, they can create lasting financial security for themselves and change their families’ futures for years to come.

“What I like best about our organization is the ability to impact finances generationally,” Debbie says. “It gives me energy. Creating wealth is a long-term proposition, but with a clear understanding of finances and a simplified, strategic plan of action, it is achievable.”

In her role, Debbie is able to focus her energy on “big picture” strategies and initiatives, such as the LiSA Initiative, a grass roots movement that focuses on financial education.

LiSA Initiative began as a women’s movement because Debbie sees women as one of the most under-served market segments in the United States. This is in spite of the fact that it’s often women alone who struggle to carry the financial burden for the family.

“Many women are the sole breadwinners for their families,” Debbie says. “And yet, they are ill-equipped to handle their finances. Initially, FFS designed LiSA to change that reality.”  As LiSA gained traction, it evolved from a women’s movement to a full financial literacy program that empowers people from all walks of life.

Besides interacting daily with the FFS family, Debbie’s greatest joy is her three grown children (Laura, Andrew and Annie – all of whom have worked at FFS), their spouses and her three grandchildren.  Her goal in life is to leave a lasting legacy for her family as well as the agents and staff at FFS,

Looking for Financial Solutions that Work for You and Your Future?

Type and press Enter to search